The weather on Sundays has just been phenomenal. This was a crystal clear day about 70 degrees. Parked at the Ramapo Dunderberg (R-D) trailhead in Tuxedo. Crossed under the Thruway and started ascending the mountain. Much of this portion of the trail has been improvised and rerouted and it has been modified quite a bit since the last time I was here. At about 15 or 20 minutes hit the first viewpoint, which is a nice overlook of the village of Tuxedo and Sterling Forest across the Thruway. Continued along the R-D, past the gas pipleline and to the Tuxedo Mount Ivy (TMI) Trail. This is the beginning of the TMI Trail. Took the TMI to Claudius Smith Den and then climbed the cliff up to the top of the den.

The Claudius Smith Den is a massive rock outcrop with a cave formation formed as slabs weathered off the cliff. It is named after Claudius Smith, a notorious bandit who used its tunnels as a hideout during the Revolutionary War. He was captured and hanged in Goshen in 1779. At the top of the formation is an excellent and well-known viewpoint.

From the top of the Den headed north on the Blue Disc Trail. There is also a nice view at this point of the Blue Disc before descending down to the Black Ash Swamp. Descended down the Blue Disc trail to its terminus at the Black Ash Swamp. (This swamp has a very cool natural rock formation causing the swamp to dam.) At this point took a left on the R-D Trail again, and veered off of it shortly thereafter taking the woods road to the Triangle Trail. Headed south on the Triangle Trail back to the R-D Trail, and took the R-D back to the car. 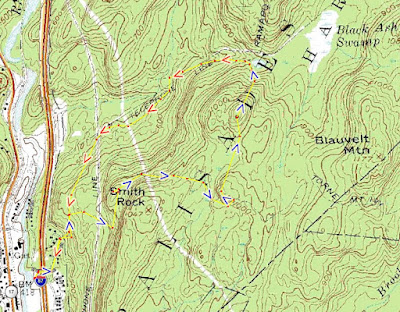 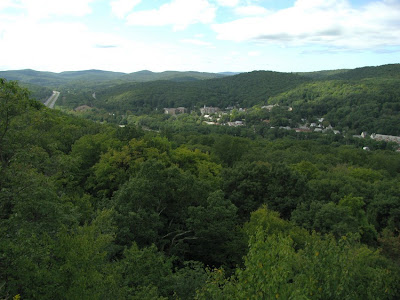 Close up of Tuxedo. Taken from Smith Rock. 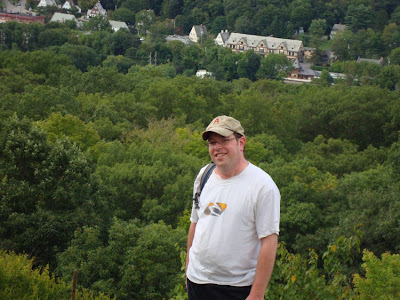 My Father-in-Law in front of Claudius Smith Den 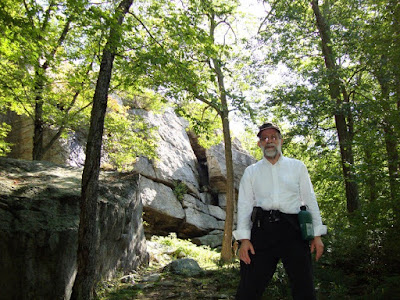 Me at the cave in front of the Den 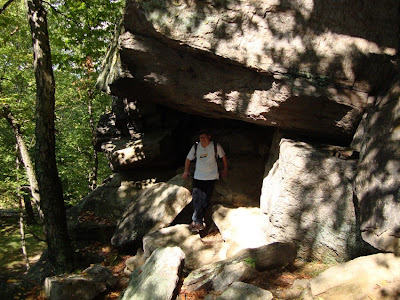 A better look into the cave. 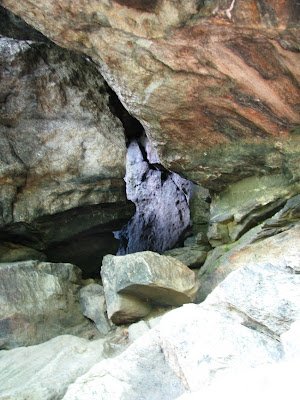 On the top of Claudius Smith Den.
Facing west on the Blue Disc Trail. 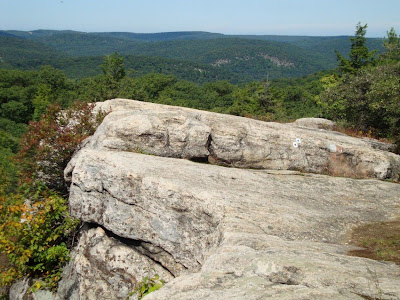 Me at the top of Claudius Smith Den.
With the Blue Disc Trail marker. 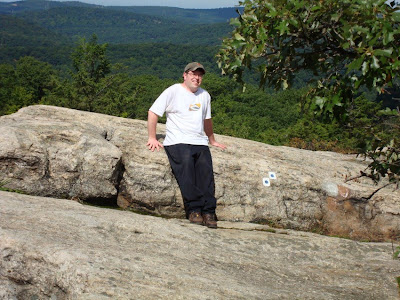 My Father-in-Law atop Claudius Smith Den. 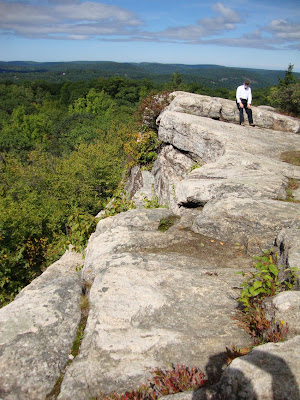 View from the Den facing South. 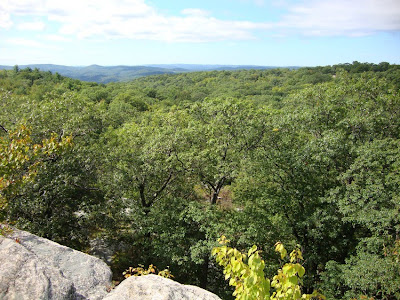 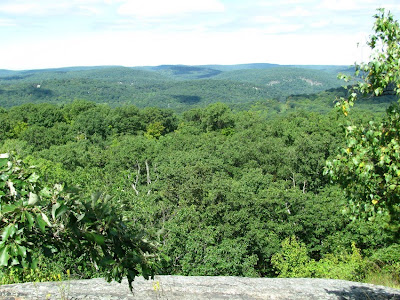 At the high point on the Blue Disc Trail
north of the Den. 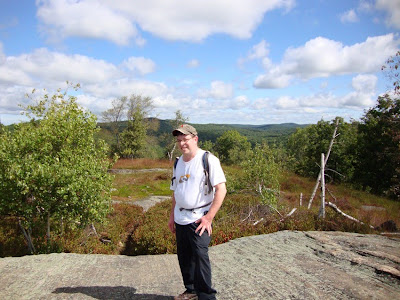 Our friend the dog who accompanied
us for much of the hike. 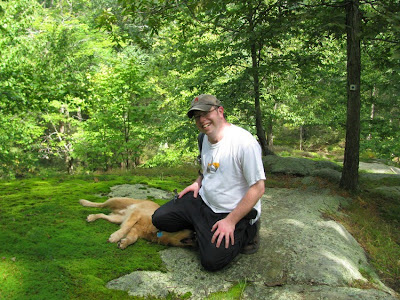 This was another gorgeous late summer day. The weather was about 75 degrees with little humidity. I finally had my camera back. I parked at the Reeves Meadow Visitor Center off 7 Lakes Drive in Sloatsburg, and took the Reeves Brook Trail up until the intersection of the 7 Hills Trail. Then took the 7 Hills Trail up the scramble which leads to an excellent view. This scramble, although short, is one of the best in the park. Took the 7 Hills up to the top of the North Hill, where there is a really good Panorama through the brush. Much of North Hill along this trail is not forested and just contains brush and short shrubs - this is presumably the result of a significant forest fire many years ago. Continued along the 7 Hills Trail down to the valley where I picked up the Pine Meadow Trail, and went down the Pine Meadow Trail, switched along the new trail to the Stony Brook Trail, and back to the Pine Meadow Trail and back to the car. 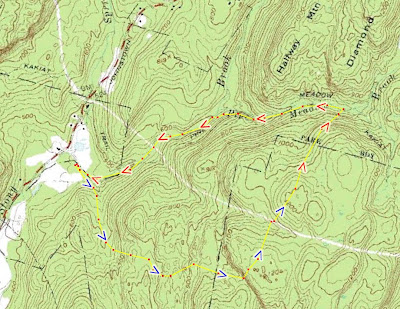 Map of the route. 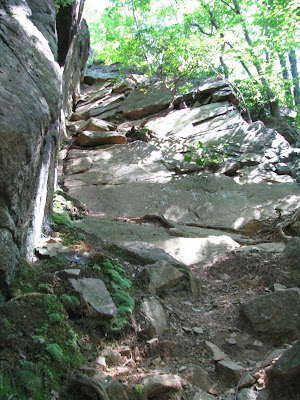 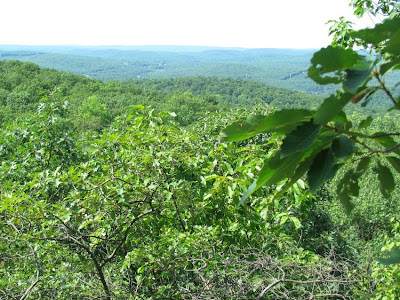 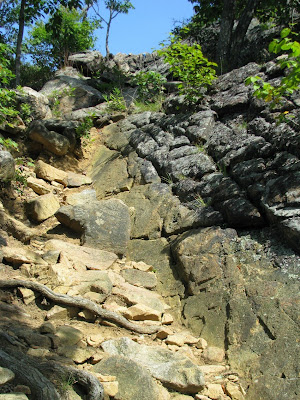 Continuing up the scramble 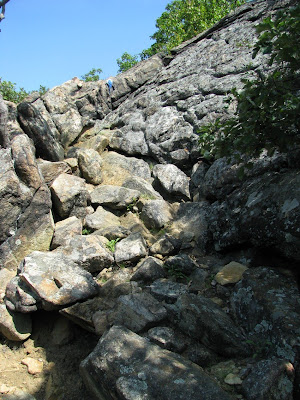 Towards the top of the scramble 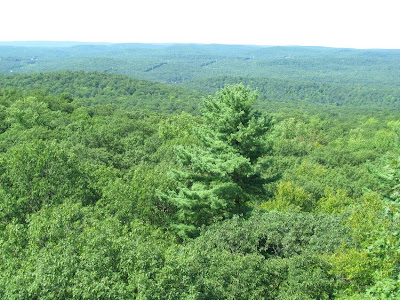 View at the top. Facing southwest. 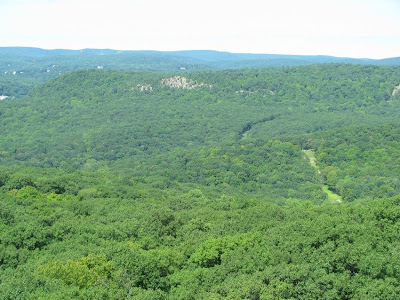 Facing north towards "Almost perpendicular".
("Almost Perpendicular" is the exposed cliff in the middle) 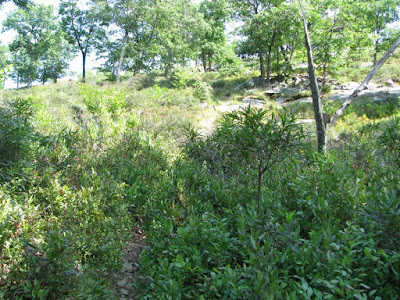 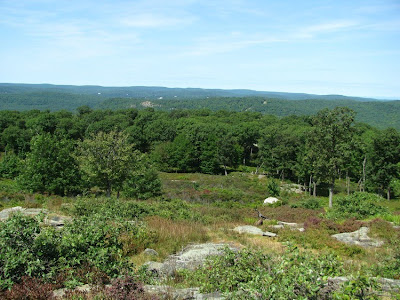 At the summit. Facing North. 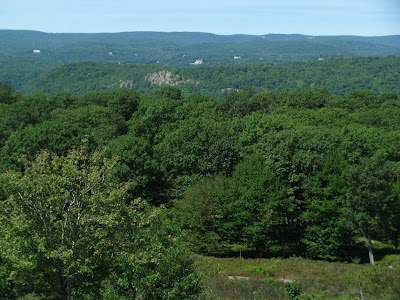 View towards "Almost Perpendicular"
from the summit. 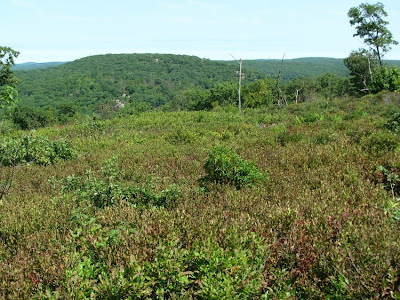 Starting the descent from the summit.
Facing northeast towards Diamond Mnt.
Jackie Jones Tower can be seen in the
far distance on the right of the photo.

Panorama from the summit.
Posted by Heshy at 8:01 PM No comments: