I was in Baltimore visiting family for the weekend, and we stuck around Sunday morning and went to this park that has some hiking trails. While not dramatic, this wooded area close in proximity to Baltimore is very refreshing and was a very good place for a family hike. There are several trails and some hills and valleys which are relatively large for the Baltimore area. We parked at the Nature Center entrance and explored the Nature Center, which explains some of the wildlife in area with several animal species (think of it as a mini, two room indoor zoo.)

The weather was very warm and may have even gotten up to 60 degrees. There were still small but melting pockets of snow in some of the shady areas on the top remaining from Wednesday's snowstorm. 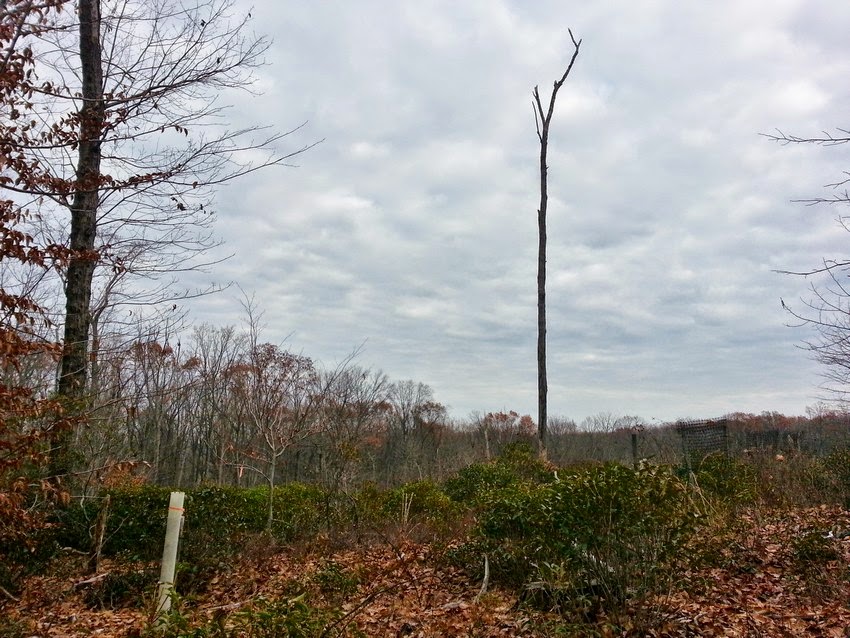 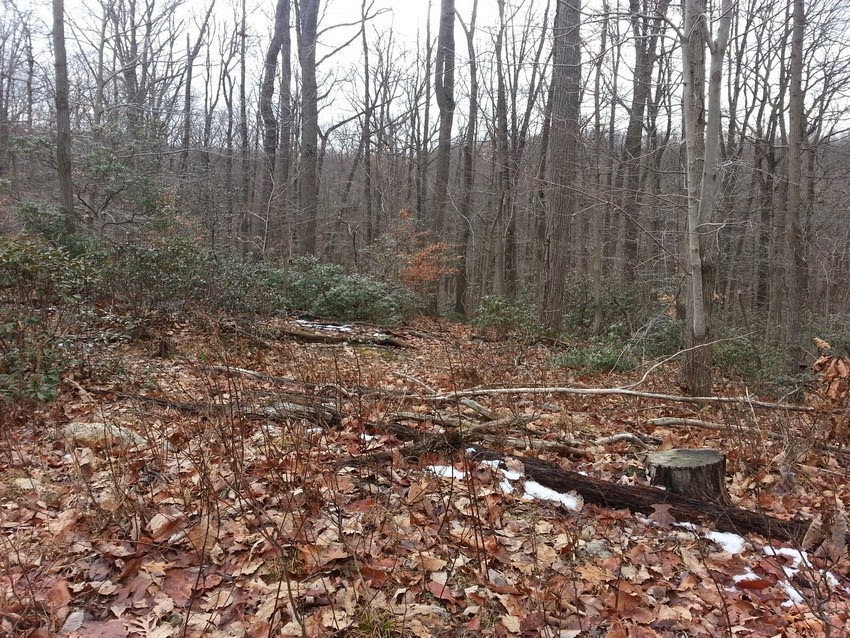 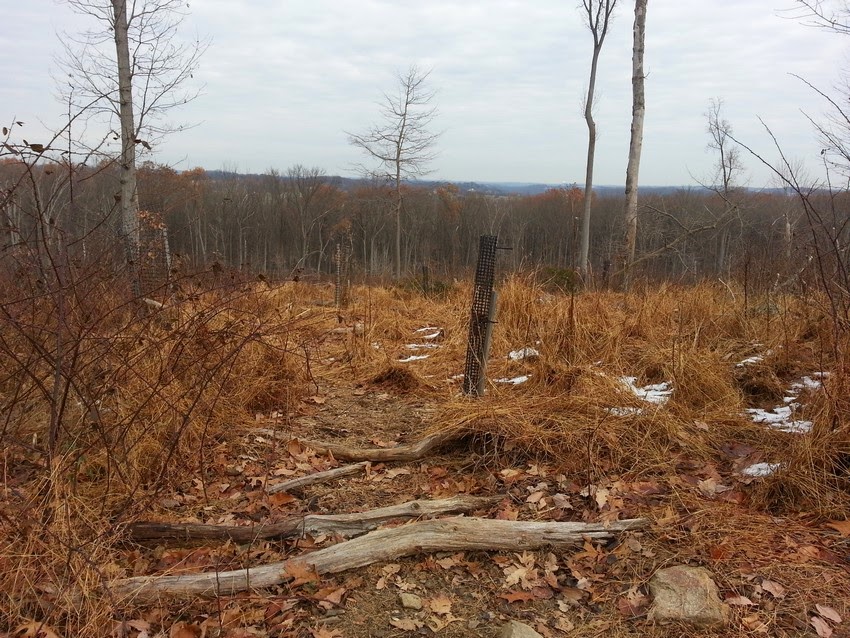 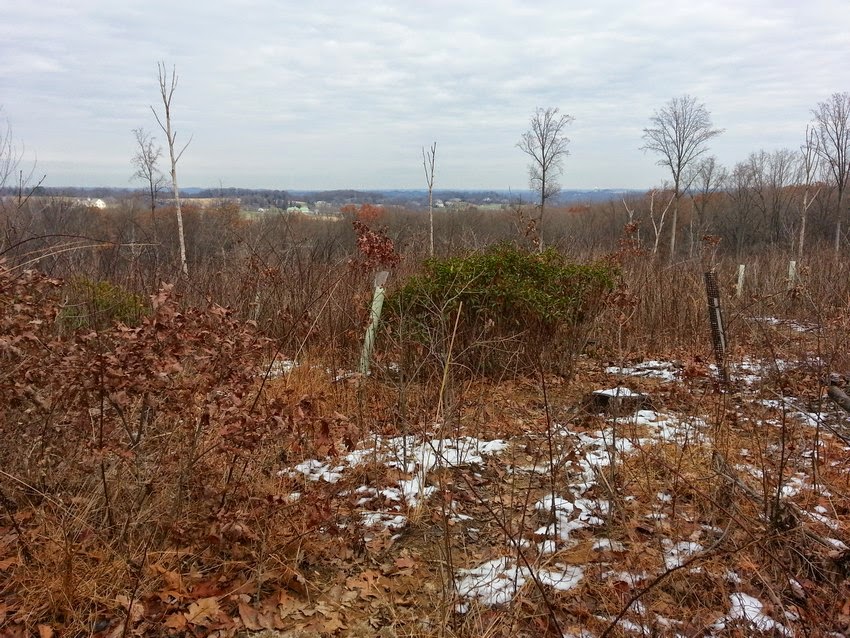 We had just gotten several inches of snow the day before, and I hear just a few more miles north in the mountains there had been a significant amount of snow. Thanksgiving is pretty early for a snowstorm, so this was quite unusual. But there was definitely a lot of snow, in the form of a thick, wet snow that seemed to stick to everything. It was quite beautiful and a scene to behold. Luckily I was off from work and able to explore in the morning, being that it was Thanksgiving. Although the storm had pulled out the night before, there was still some light residual snow falling throughout the morning including during this hike, making it a surreal experience.

I parked at the parking lot down by Lake Skanatati, and had planned on taking the A-SB Trail up the mountain to the view. Due to my limited time, I had intended to make the hike short and complete it at the view atop Pine Swamp Mountain, and then head back down the same route.

However, upon ascending the mountain, I noticed the trail being routed with a new route going towards the east. Now I noticed that the trail crews had been working in the area recently and refurbishing the trail. Now I figured that this was a work around the short rocky scramble. However, I was surprised to find the trail continuing along parallel to the road and not turning back west to the view!

I continued along the new trail, not sure as to its destination, until I noticed it finally merging with the original trail as it made the turn descending to the Pine Swamp. This seems odd to me as it would be seemingly eliminating a very important part of the trail which includes an excellent view! Perhaps the Red Cross Trail has been routed back to the view, though I'll have to further explore to know forsure. It was hard to tell exactly what was going on as well due to the snow covering the ground with no prior foot marks on the trail.

Once I approached near the original trail, I turned around and then bushwacked down towards the valley towards the Red Cross Trail as it descended towards the 7 Lakes Drive. I took the Red Cross Trail to the road, and then headed south along the road, along the side of Lake Askoti, all the way back to the parking lot. The road was eerily quiet; only one car had passed me during the entire walk along the road. I have to return to further explore what is going on here and how the rerouting of the trails has been done.

This was the first snowfall in the season, and was very early. This was the day before Thanksgiving, and we got around 5 inches from this storm. I decided at the end of the day to do a quick loop in Kakiat Park around the Old Mill Trail. I arrived at Kakiat about half an hour to sunset, and started walking. It was a bit windy and the snow was very wet and heavy, and I saw lots of branches sagging. This gave me an uneasy feeling with the trees after I saw some large branches coming down, and I cut the walk short and just took the first part of the Old Mill Trail to the connector trail, back to the Kakiat Trail to the end.

Black Rock Mnt and Hogencamp Mine

This was a beautiful late fall day with temperatures warmer than usual. This particular hike is one of my favorite areas in Harriman State Park, with zones of giant rocks and stunted trees. We parked at the trailhead past the Little Long Pond on Lake Kanawauke Rd by the Ramapo-Dunderberg Trail. We took the R-D Trail north up the climb to the Black Rock Mountain view. We continued along the ridge where excellent views abound and large and interesting rocks are all over the place.

We header east along the Nurian Trail towards the Hogencamp Mine, past the “Bowling Rocks” and upon reaching the Hogencamp Mine, we explored some of the upper mine workings. We then looped around the Hogencamp Swamp, and took an old woods road on the other side of the swamp back towards the road. This path has been mostly obliterated by Hurricane Sandy and is difficult to follow. Upon meeting up with the road, we walked along the side of the road on the side of Little Long Pond back to our car.

My camera was unfortunately on the wrong color setting, and most of the photos that I took have their color off. I tried fixing them in Photoshop as best as I could, but it still isn’t great.

This was a bitterly cold Sunday for November. There was actually 2 inches of snow on the higher terrain from the rain storm on Friday that ended as snow in the mountains. I parked at the Lake Sebago parking area, took the 7 Hills Trails up and over Conklin Mountain, and then headed on the unmarked path towards Lake Wanoksink. I took the small trail that goes along the southern shore of the lake, and from there took the connector trail to Pine Meadow Lake. At Pine Meadow Lake I headed east, past the ruin and along the shore of the Lake, until I reached the Conklin's Crossing Path.