* This is a new trail near the MacMillan Reservoir, and its not yet on the map and I don't know its name.

This was a beautiful, late-October fall day with temperatures in the 70's. Though it was a weekday, I took a bit extra off for lunch to do this hike. I parked in the large parking lot at the entrance, and took the Silver Trail across the Ramapo River, and at the Scarlet Oak Pond took the wide loop trail around it. I then went back on the Silver Trail, climbing up the hill through the valley, and near the MacMillan Reservoir, I took a short spur to the south side of the dam. This used to be a well-known shortcut; now it's blazed pink and keeps on going after the dam.

I walk around the bottom part of Kakiat on the Old Mill Trail on a fairly regular basis for exercise. On this particular beautiful autumn day, the sky was bright blue and trees were in vivid color. I took the following photo with my cell phone camera near the beginning of the Old Mill Trail facing towards the evergreen forest grove. 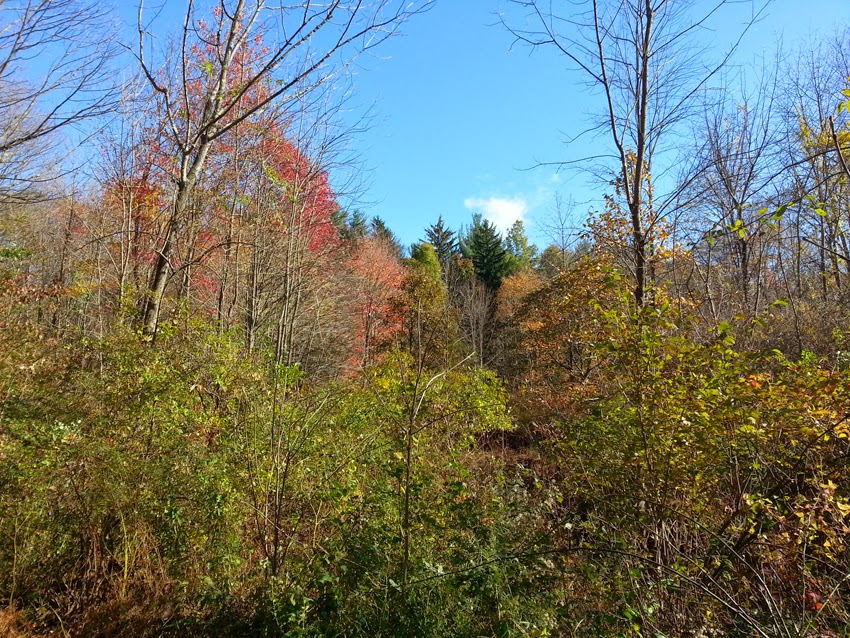 This was a nice day with comfortable temperatures at the peak of the autumn foliage. We parked at the Doodletown Trailhead by the Cornell Mine Trail opposite Iona Island, and took the Cornell Mine Trail south to the "10 Footer" waterfall. We then crossed the stream and forked on to to the 1777 E Trail. We continued on this trail past the reservoir and through some of the Doodletown historic sites, and continued along the 1777 E Trail until the Suffern-Bear Mountain Trail.

Bear Mountain has an Oktoberfest every year, and this was the last week of it. Thousands of people come and drink beer in huge mugs that there is no way they can finish. The trail goes right through the Oktoberfest so I decided to check it out. The amount of people that come for this event is very impressive. Cars were backed up for quite a while on Seven Lakes Drive all the way back. A word to the wise: If you intend to go hiking in autumn, make sure to come early so that you get a good parking spot. We continued on the 1777 E Trail back to the car.

The peak of autumn was arriving, and I had wanted a mountain with very good vistas, which this area certainly has. I had a tradeshow nearby in New Jersey, and headed nearby to High Point to check out the place. Although it was sunny, it was an extremely code day for October, and the wind was howling on top of the mountain. It was the type of steady wind that can almost make you fall. Though I wanted this hike to take longer, I was simple worn out at the end and cut out and turned around earlier than I had intended to.

Parking here is free after Labor Day, but during the summer it costs $10 to get in (New Jersey residents pay $5.) I parked near the tower and walked inside. It was the last day that the park staff were allowing people to climb the tire prior to closing it for the winter, so I am glad I arrived when I did. I climbed all 200 or so feet of the tower, but was disappointed to find nothing in top, with dirty and hazy windows.