Although this excursion was not a hike, it is still noteworthy for the blog due to the good workout and interesting terrain. On the last Sunday of every month, the Sterling Hill Mine is open to collectors who can go in the mine dump and into the Passaic Pit quarrying area to dig and move rocks. This was the first Sunday since the winter that it was opened, so I came to take part in the diggings, taking a few photos of the quarry in the process. More information on minerals can be found at the author's website at www.minerals.net.

Below are various photos in the Passaic Pit: 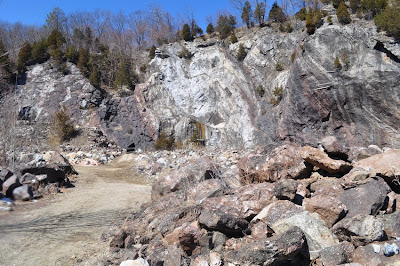 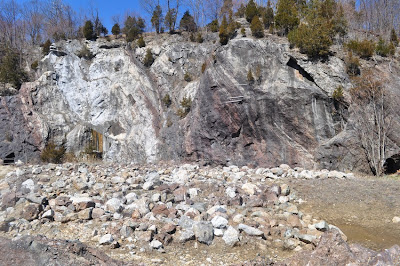 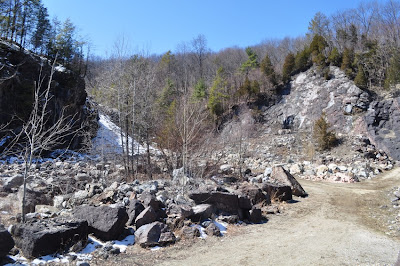 I parked at the Reeves Meadow Visitor Center off 7 Lakes Drive near Sloatsburg. Hiked the Pine Meadow Trail along the brook which was roaring to the Stony Brook Trail, and then along the Kakiat Trail past the Cascade of Slid waterfall. Took the HTS Trail for a short duration across the brook, then took the Pine Meadow Trail back towards the return and back to my car.

I parked in Haverstraw behind the enormous mine works at the terminus of the biking trail that goes along the Palisades Cliffs and the Hudson River. Walked down the bike path until the abandoned park cabin, where I picked up the white-blazed Connector Trail that goes to the Long Path. This trail passes near a trail tunnel where the railroad goes underneath the mountain, so it was interesting watching a trail go through the tunnel while hiking.

Once I hit the Long Path I continued to the summit. Although the summit is a narrow ridge above both sides which are lower, there are surprisingly no good view available. At this point I turned back, went down the Connector Trail, and went south once I hit the bike path to explore the old quarries along the side of the mountain. These quarries are very old and were used to mine traprock at the turn of the century. Their walls are very impressive sheer cliffs with vast amounts of talus at their foot. The Palisades Park was created to protect the area from being totally obliterated from the quarrying operations. From there turned around and went along the bike path back to the car.

There had been an enormous rainstorm on Sunday with about 5 inches rain within a 24 hour period. The day after this storm there was flooding all over the area, so I figured this would be a good day to hike at Kakiat which is prone to flooding to observe this. Since it was a weekday (I had not been able to hike on Sunday because of the rain), I had to keep this hike short.

Started at the Kakiat parking area, crossed the bridge at the raging Mahwah River, and took the partially flooded-out Old Mill Trail for its length until the Kakiat Trail. I had to hike on rocks and detours to avoid the flooded and washed out portions. Took the Kakiat Trail slightly up the mountain, and veered off to the Kakiat waterfalls, which were falling strong. From there I bushwacked up along the side of the mountain to the lower Kakiat viewpoint, and then hiked down the Mountain Trail back to the parking area.

These pictures were taken with my cell phone camera since I didn't have my regular camera with me.