This was a much longer hike then I had expected. I also moved along very quickly, and didn't take any breaks so I came home quite charlie-hoarse. Started out at the Johnsontown Rd. Cemetary (not far from Lake Welch), and took the Long Path southeast. Hit the Old Turnpike and then turned onto the Road to Camp Lanowa. At Camp Lanowa I met a park ranger who got upset at me for trespassing camp propery, but hey, this is state parkland and I have a right to hike it. I didn't want to argue with the guy so I just apologized and went on. I wanted to take the unmarked trail up Breakneck Mountain to the Breakneck Mountain Trail, but I somehow missed it and ended up taking a different, overgrown unmarked trail (that's not even on the map) alongside Breakneck Pond. (This mountain is not to be confused with the very famous Breakneck Ridge, a mountain about 25 miles north on the western shore of the Hudson River.)

Breakneck Pond is one of the most remote lakes within Harriman State Park as there are no roads leading to (except for the camp road) and there aren't any official hiking trails that touch it. It is actually one of the few lakes in Harriman inhabited by beavers, as evidenced by the beaver-bitten trees all along the shoreline. Anyways, after hiking along the south shore of the lake for a little bit, decided to bushwack thru the dense brush up the steep hill towards the Breakneck Mountain Trail. Finally hit that trail and hiked along south till its short end. Breakneck Mountain is high mountain by Harriman standards but doesn't show any views, although it does have several nice rocky summit areas. At the end of the Breakneck Mountain Trail, took the red-blazed Tuxedo-Mnt. Ivy Trail for a very short distace to the old Pine Meadow Road path, which I took to the Buck Trail. Took the Buck Trail west to the Buch Extension Trail, and then back to the Pine Meadow Rd. path. From there took the Cranberry Mountain Trail north back towards the Long Path, and took the longpath back to where I parked the car.

Breakneck Pond from the shore near Camp Lanowa.
At north shore looking southwest. 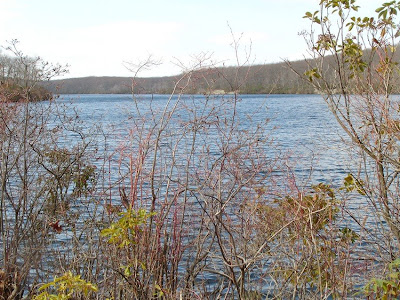 A partially gnawed tree attacked by a beaver 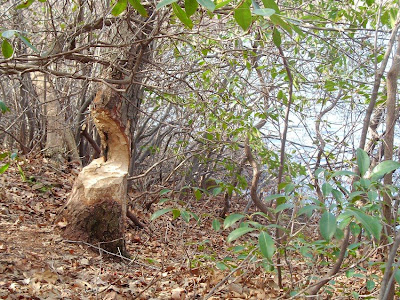 Breakneck Mountain Trail near the summit 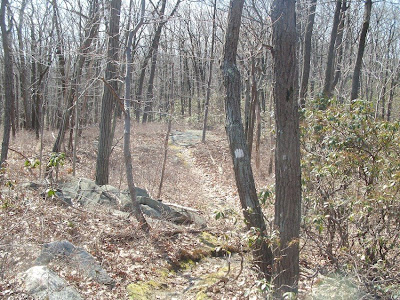 Summit of Breakview Mountain Trail. Facing SW.
The view on this mountain isn't the greatest. 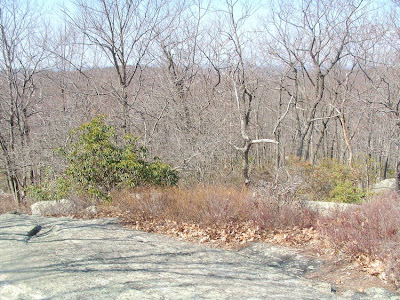 Intersection of the Buck and Buck Extension Trails. 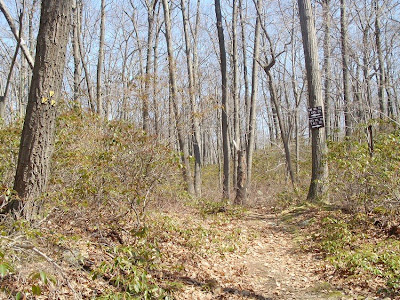