Hike on frozen Lake Welch and after a small snowstorm. We hiked on lake and explored the Islands on Lake Welch, and then bushwacked to a trail and continued the hike on a trail. There was about 3 inches of fresh snow on top of the frozen lake. We encountered several ice-fisherman as well as cross-country skiers on the lake. The three islands on the lake, which we explored, were very dense with brush and small tress and we had to crawl on hands and feet through them.

We then hiked on the lake to the frozen and snow-covered beach, and then attempted to find the old Hasenclever Road. We couldn't find the road so ended up bushwacking from Lake Welch north to the Beech trail. Took the Beech trail west towards the road, then walked along the road back to the car.

Looking east from the road.
The lake is quite busy with skiers and fishermen. 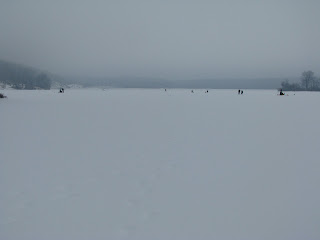 Ice Fisherman complete with a portable grill.
(They told us they brought along extra fish
in case they don't catch any)
One of the islands is in the background. 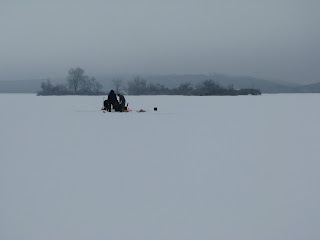 The hiking team: Heshy and Sruli 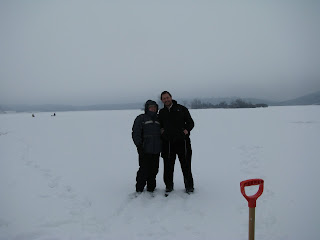 Heshy emerging from the dense brush on the island.
Note the thick layer of ice on the brush. 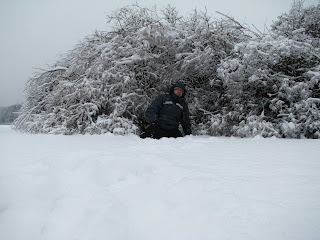 Sruli hiking along the lake. 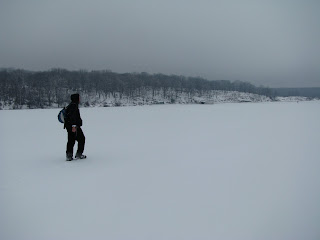 Jackie Jones tower in the snow and fog.
Looking south from center of lake. 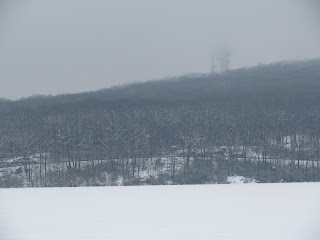 Sruli climbing a flagpole at the lifeguard station 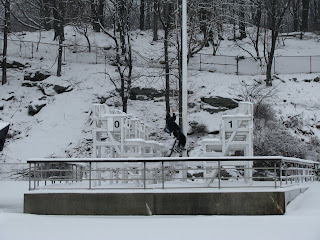 Pretty stream in the snow during the bushwack part 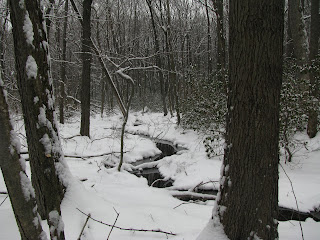