I took a tour of West Point, and although this wasn't a hike, I got a phenomenal photo of the Hudson River from West Point as it passes through the deep gorge between Storm King Mountain and Breakneck Ridge. So I am sharing this photo with you. It was a stormy day (mind the pun) and the cloud coverage on the mountains really make this picture exceptional. I actually climbed Storm King two weeks later; these pictures will be posted soon. 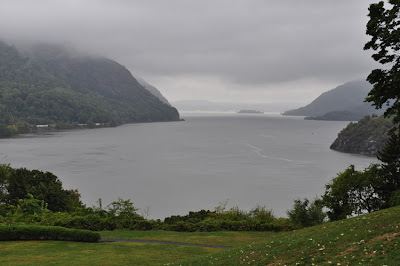 From West Point looking North at the Hudson.
Storm King (Crow's Nest) to the left,
and Breakneck Ridge to the North.
Bannerman's Island is in the distant north.
This picture really looks like a Norweigan Fjord.